All around the world the 1st of may is celebrated, despite measures due to the pandemic and repression. At the same time we are seeing news about struggle and resistance, and the deepening of the crisis and the decay in the imperialist system.

Remarkable still is some protests from what seems to be anarchist and progressive forces in Trondheim, and some spontaneous 1st of May rallies happening in several cities, where masses decided to show up for protests, even though it was “cancelled”.

During the 1st of May campaign, we have received a lot of reports of propaganda activities:

We have received reports from several Norwegian cities where the revolutionary movement have conducted activities in the streets, going against the government regulations and social democratic cancellations. There has been carried out activities in other places as well. The reports we got can be read below:

Kampkomiteen: Reports from  1st of May celebrations

Kampkomiteen has updated their website with the following report with further details from the celebration, that can be read here:

TFM has received and published a video on Youtube of activists from Kristiansand burning the Yankee-flag and shouting slogans:

TFM har recieved a picture from a video that shows revolutionaries in Trondheim burning the Yankee-flag:

A contributor to TFM reports the following:

Revolutionary activists gathered in Thornæsparken for a celebration organized by Rød Front (Red Front). Knut Olai Thornæs was a leading member of the Communist Party of Norway and wrote the song “Fram Kamerater!” (Forwards comrades!) that is still sung  by many, and in the park there is granite statue of him.

An activist held an inspiring speech based on the international Maoist declaration written by the editors of El Maoista. The activist was flanked by the red flags with hammer and sickle, and a banner written on it “Workers and Oppressed People’s of the World, Unite!” was also held up.

We have received the following report from Oslo:

Revolutionary activists celebrated the day by honouring on of our martyrs and great leaders of the Norwegian proletariat. On the evening 1st of May the activists went to Kampen in Oslo, where the stolperstein for Ottar Lie is placed, right outside his old home. Ottar Lie was honoured by there being rolled out a red flag with a hammer and sickle, an activist also held a speech about Ottar Lies life, his leadership and his complete sacrifice for his class and party. The ceremony was ended with all the activists laying down red roses by the stolperstein. Ottar Lie died a martyrs death the 1st of March 1943, when he was murdered by the nazis at Trandum in Oslo. But as he self said right before the fascist executioners executed him and 16 others: “Our bodies you can destroy. But our ideas you can never smash!” Ottar Lie continues to live on through us!

Later the same evening hundreds of people in Grønland, Oslo could witness a 10 metre long banner hung from the Vaterlands Bridge, with the immortal slogan: “Proletarians of the world, unite!”

Oslo: Kampkomiteen celebrated 1st of May on the street

TFM has received the following from a contributor in Oslo:

Kampkomiteen in Oslo celebrated the working classes day of struggle in Grønland, Oslo. Activists put up a stand where it was distributed flyers,protective masks, hand sanitizer, and disposable gloves. The place was decorated with red flags and there was played workers’ and anti-imperialist music from the people’s struggle in Norway, Chile and several other countries. An activist held a short speech on why it is correct to take to the streets on the 1st of May, despite the social-democrats “cancellation” of the marches. The short speech emphasized that it is right to rebel and that we live in times of change and rebellion.

Many stopped by for a chat, to share their discontent with the current system, and some participated actively throughout the celebration. A lot of people appreciated that there was distributed masks for protection against COVID-19, as protective masks has been mostly sold out in Oslo. The Red Flag will always fly in the east of Oslo, regardless of crisis and unrest. Despite the pandemic – 1st of May in Oslo was celebrated in the sign of the masses!

Bergen: Celebration under the slogan “Combat and Resist!”

We have received the following report from Bergen:

In Bergen revolutionaries lined up in front of Sjøfartsmonumentet with a banner with the following slogan “Combat and Resist”. There was held four short speeches, shouted slogans that received applause from spectators. The Internationale was also sung with participation from spectators.

TFM has been sent the following picture of a painted slogan in Tromsø on the 1st of May:

Trondheim: Kampkomiteen celebrated the 1st of May

We have received a report from Trondheim that Kampkomiteen has celberated the 1st of May in the main square in the middle of the city. It was celebrated with a banner written on it “Combat and Resist!” Two activists held a short speech each on the behalf of Kampkomiteen, where the organisations line was put forth. A red flag was held up. After the short speeches the participants shouted several of Kampkomiteens slogans.

In Kristiansand there is reported to be held two short speeches in Tresse, and that aktivists from Kampkomiteen also has taken part in hosting a breakfast and afternoon gathering with songs, music and short speeches, as a replacement to the cancelled official Trade Unionist program. 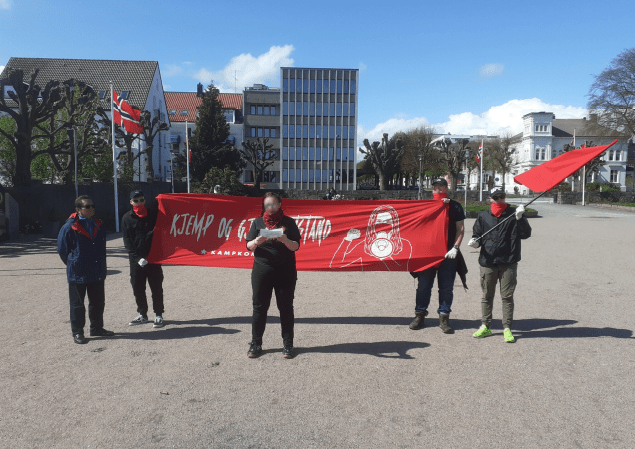 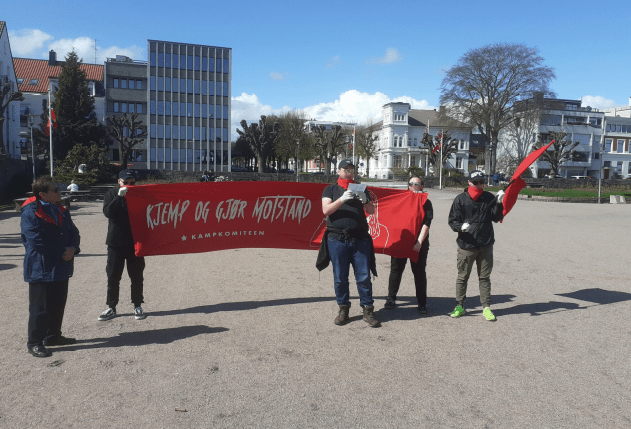