Notes on the elections in Brazil
2 December 2020

More than 56 million boycott the electoral farce - 30% of voters repudiate false democracy and call for a new way forward ...

Sweden: The comrades at Kommunistiska Föreningen (Communist League) reports that proletarian revolutionaries in Gothenburg have made paintings in honor of the fallen comrade Joselo, from the Communist Party of Ecuador – Red Sun. ...

Regarding the 200th anniversary of the birth of Friedrich Engels last weekend an event was held in Bremen, which informed the present comrades on the life of Engels. Especially his determination and absolute dedication for the revolutionary cause of the proletariat and his role in the foundation of the ideology of the proletariat, Marxism, was put forward. But especially highlighted in Engels' revolutionary life was his firmness in principal because Engels was a convinced defender of the necessity of revolutionary violence, opposite positions were fought by him until his death. So Engels fought with rifle in hand in the front… ...

On November 25, the Day against Violence against Women, several hundred people gathered in Hamburg and Bremen to demonstrate against patriarchal violence in spite of the state of emergency in the FRG, which has again become more severe. This year the 25th of November is of special importance, because with the imposed state of emergency the cases of violence against women have also increased enormously. The bourgeois state, which is largely responsible for the increase in patriarchal violence, also tried to use 25th of November to its own advantage and launched a pretentious campaign in an attempt to bring the… ...

On occasion of the 200th anniversary of the birthday of Friedrich Engels proletarian revolutionaries hoisted 200 flags with Hammer and Sickle in the night to Saturday throughout Wuppertal. In the evening, revolutionaries participated in a demonstration on occasion of this anniversary. When the police attacked the manifestation in order to take and identify participants this was prevented by a determined intervention and those attacked were freed. ...

In the current crisis of imperialism hunger is growing to be a bigger threat to millions of people than Covid19. ... 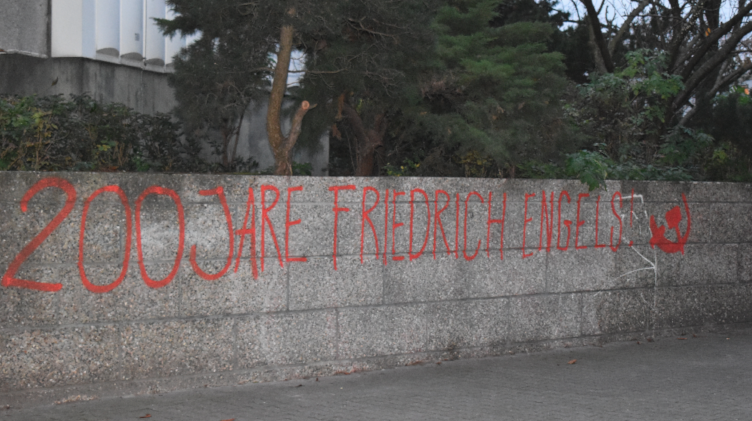 We document a photo of a grafitti in Berlin Gropiusstadt on the occasion of the 200 annerversary of the birth of Engels.   ...

Already on the 16th of September, the French Minister of the Interior announced a new amendment to the law, which has now been discussed in the National Assembly on the 17th of November. ...