For several decades, the US has waged a propaganda war against Iran. In the 1980s, the US supported Saddam Hussein and Iraq in their war against Iran. Both the US and the USSR provided weapons for Saddam Hussein’s war of aggression against Iran. The US has subjected Iran to a number of sanctions and are open about wanting regime change in Iran. This is the context for the US recently having blamed Iran for the explosion that occurred on a Norwegian ship. Don’t be fooled by the war propaganda!

There is a real regional rivalry between US-allied Saudi Arabia and US-hostile Iran. In Syria and Yemen, Iran’s allies have long been in direct war with Saudi Arabia and the US’s allies. The US agenda is clear. Everything they do in regards to Iran has to do with creating pressure against the country and building consensus for their sanctions and desires for regime change. More recently, this propaganda serves for legitimizing war.

The US is already engaged in a cold and low-intensity war against Iran, with aggressive sanctions, encircling, attacks, support for opposition forces, and support for regime-hostile guerrilla groups, in addition to wars in Syria and Yemen, which bear the characteristics of being semi-proxy wars. All US propaganda against Iran – all of the US’s claims – must be seen in the context of this low-intensity war.

Even though we need to emphasize that we do not know who is responsible for the explosion on the Norwegian ship in the Persian Gulf, that we do not know if this was an attack or not, it is imperative to remember that war propaganda need not take the truth as its starting point. Occasionally – and more likely often – the real incidents are distorted and abused to legitimize the operations of war hawks.

In 1939, the Nazi regime accused Poland of carrying out attacks on German minorities in their country, which was construed as a direct attack on Germany. In the months leading to the attack, Hitler accused the Polish state of oppressing all Germans in Poland. Historians have pointed out a number of false attacks against Germany, which were later revealed to have been orchestrated by Germany itself in order to legitimize the invasion of Poland and thereby the start of WWII.

In 1964, the Gulf of Tonkin incident led to the US escalation of its intervention in Vietnam, and soon after a full-scale invasion and what is now known as the Vietnam War. Since then, then-US Defense Minister McNamara and documents from the Pentagon and the NSA have revealed that the incident was deliberately fabricated by the US to legitimize its escalation.

In 2003, the US invaded Iraq after having carried out sanctions against the country for more than a decade. The invasion was legitimized with claims that Saddam Hussein’s regime in Iraq had connections with the September 11 terror attacks and that Iraq had possession of weapons of mass destruction. Several years later, it was proven beyond a doubt that the accusation that Iraq had weapons of mass destruction was completely baseless. A clean-cut fabricated pretext for the legitimization of the war in Iraq.

Whether the propaganda is based in reality, has a speck of truth to it, or if it is outright lies is irrelevant. It is irrelevant for the imperialists and it is irrelevant for us. The US aggression against Iran is not legitimate, nor will it ever be. The US is the world’s largest imperialist. Their agenda is political and military power, for economic and political gains. They have no other agenda other than to advance yankee-imperialism, advance US political and economic interests, and advance the yankee-bourgeoisie’s leading position in the world. The US is the world’s only superpower, a dominating position they are desperate to maintain by any means possible.

Even though there is nothing that can legitimize US aggression against Iran or other countries in the third world, it is useful to keep in mind and explain what war propaganda is and how unreliable Western media is in this context. In the case of Libya and Syria, we have seen the propaganda machine work at high gear. Western media has primarily operated as an extended arm of the yankee-state’s foreign affairs department.

The Iranian regime is rotten, bourgeois, reactionary, and anti-communist. They came to power in a bloodbath against the country’s revolutionaries. No communist has any sympathy with Iranian capitalist clerics. But that close friend that the US has in Saudi Arabia isn’t any better. On the contrary, they are everything that Iran is, but even more rotten, and allied with the world’s largest imperialist. Therefore, we see through the US’s agenda when it comes forth in Western media. It is not to the benefit of the masses living in Iran, nor those living in Syria, Libya, Venezuela, or North Korea for that matter. The only thing it brings is plunder and oppression.

Reveal and reject the war propaganda! 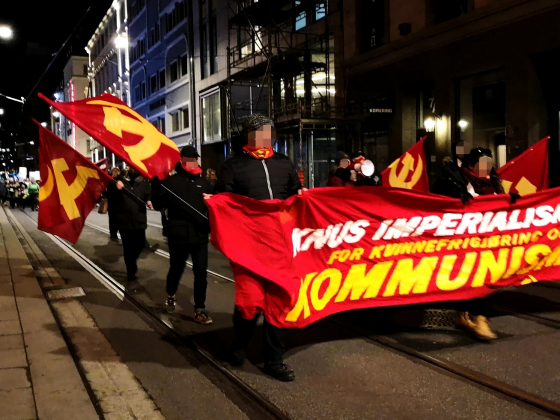